So Miami. Maybe no city would be able to match my expectations, and I certainty had too little time in Miami to discover the hidden treasures. The crowds strolling Ocean Drive were however as little dressed as promised and the cars were as shiny as advertised. That was cool. I would really not recommend eating in Ocean Drive though. Also, the lines outside clubs on 4th of July were crazy – not cool, especially since the rain started pouring down the second the lights in the sky went out. But hey, I was THERE!

But I did find the time to visit little Havana, since I recently explored the big one.
And I bought some fine cigars there too 😉 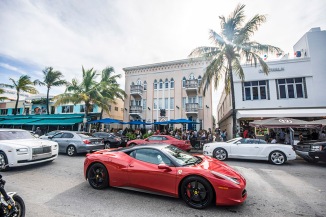 Alone under the skies >>